My husband doesn’t want to go watch junk with me. Haha.

This is why, I have these friends:

Tonight we went to watch the second scary movie from Syamsul Yusof, Munafik. 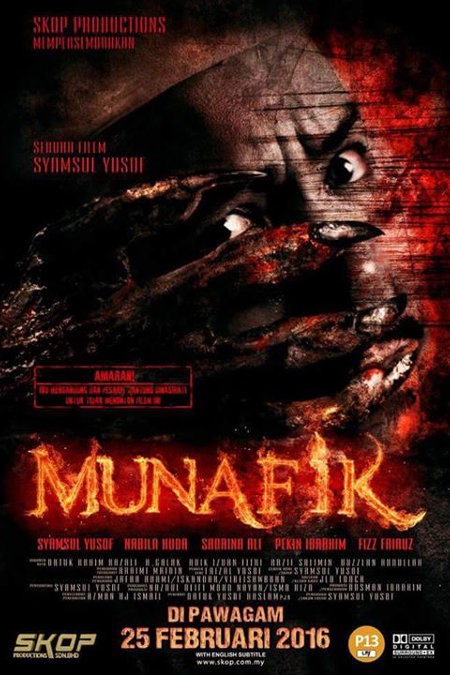 Its about a guy, Adam, who was involved in a hit and run that ended up killing his wife. The events in the movie happened 3 months later, and aside from him being unable to get over his wife’s death, there’s a parallel story of Maria, daughter of one of the richest men in the kampong, who keeps on being a victim of kerasukkan.

The movie brought us to why Maria is haunted, through horror and suspense. Earlier on we are made to believe that the stepmother is the culprit but in the end, it is revealed that she is innocent. Wish she and Maria had developed their relationship more in the end actually but I guess they needed Adam to be the one who saves the day.

Maria’s storyline with her supposed “lover” – ie that guy who keeps on calling Maria’s stepmother “sis” haha – feels really forced and unnecessary. There’s no chemistry whatsoever and I really hate how they portrayed depression.

I find the scariest parts:

Overall, an awesome horror movie – 7.5/10. I appreciate the twist ending, which I sort of partly guessed from the beginning – but nothing like the twist ending in Khurafat, which was more unexpected.

I really like the movie’s protagonist- who is able to portray his loss with not only tears but also desperation.

What did you think of the movie?

One thought on “At the Movies: Munafik”

And just like that Zayd is one! Celebrated over lunch in true pandemic style over zoom! Thank you to everyone who sang for zayd (repeatedly) 😂
We so enjoy the sweetest golden hour before maghrib. Zayd comes down to say hello to the turtles 🐢 , explore (eats) grass and practices his “walk” while I water my plant babies 🌿
Two days, and two doses. Sis is fully vaccinated. Also sis is feeling macam reflective looking at these two pics - difference between the two days. In one day our situation completely changed. #kunfayakun
When we were preparing for Zayd to come to our lives, overwhelmed and feeling anxious, with an unclear due date, I don’t know how many times we dropped by @littlewoodsbrunei (formerly Bebeland) to tick off items off our neverevending list (courtesy to the internet - information overload) 😂
Big bad wolf for #baidurienchantedforest. Huff and puff away…. Awooo awooooo~~~ swipe the most left to see who made this costume. Inda boleh baibun mesti serious dan kana marahi pasal minta buat ekor jua heheheheehh..
Well done me 😂#alphachallenge2021 is kinda like zombie apocalypse training… 😂 thank you all who were involved in getting me to the other side of this wall tapi unsuccessful 🤣 maybe next year i’ll lose more weight so possibly able to do 🤣🤣🤣 congratulations to everyone who completed the race today! I am craving for cold drinks all day, how are u guys doing? 😂😂