You know I love horror movies and of course I must watch the sequel to Munafik!

Syamsul Yusof made a name for himself with Khurafat, a movie that in my opinion really turned around the Malaysian movie industry.

2 years after Munafik, we meet Ustaz Adam again, but this time, aside from beings from the supernatural, he is facing an extremist cult and the painfully villainous leader, Abuja.

Here are the things I love about this movie:

2. Original plot! I don’t remember ever watching a Malaysian horror movie about extremist cults… I find it quite original though I thought the plot rather underwhelming despite having great promise.

3. Clever use of foreshadowing. So many clues to the twist but I never guessed Adam would do something so heinous in the end- even if he was under black magic influence!

4. Strong dialogue! Adam delivers the best lines when he is under duress or facing off with demons.

5. Maya Karin’s beads of perspiration. She brought the Sakinah character to LIFE! And Syamsul Yusof did not fail her and her flawless skin!!!

1. No backstory for Abuja. Despite being the most interesting character in the movie, we did not get any rhyme or reason on why he is the way he is.

I always find the best villains are those that we have conflicting feelings about- Voldemort and his difficult childhood, Joker craving for Batman’s attention and validation, Hannibal Lector who witnessed murder and cannibalism of his sister…. in the end u realised they are humans just like u and me, and anyone can be a villain.

Why is he that way? Is he a psychopath? He does not seem to feel pity and seem to enjoy manipulating Sakinah. What is the backstory? Why is Sakinah saying Aina is his daughter? Why is he wearing so much fabric? Who does his laundry?

I demand a prequel, starring Abuja! 😂

For someone hellbent on the melodramatics, this was not explored.

2. Brings us to the second point. Chill on the tears and close ups! Melodrama overkill! I think this movie can benefit from a little restraint on Adam’s part and subtlety on Abuja’s part.

3. Where are the policemen in this country? Are they all scared of being black magicked that no one investigates the murder of more than 10 villagers??? This part is so unrealistic.

All in all, Munafik 2 is not as strong as Munafik 1, though it has its moments. The coffin scene is quite fresh and original, and the ending is a harrowing example we need not be afraid of the supernatural but the real evil lies in greedy, egoistical humans. 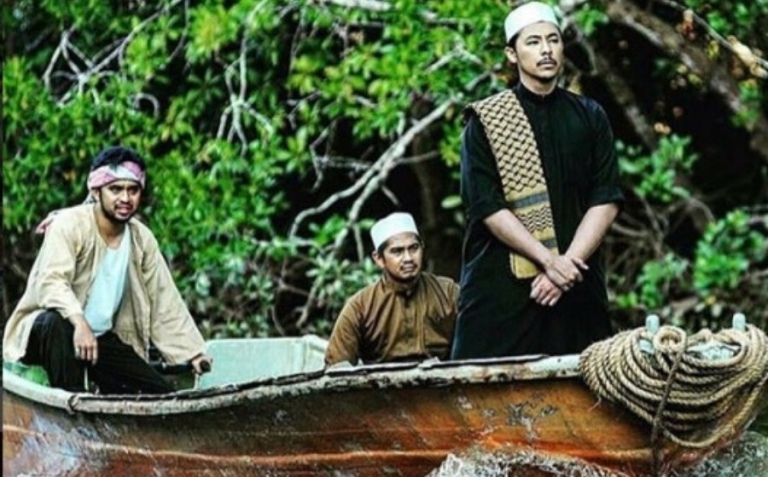 Something that needs to be said: I was really impressed with Mawi’s acting! I didn’t realise he can actually act especially that one touching moment when he confided something with Adam about his wife. Well done Mawi.

Looking forward to see him in more movies!

To me Munafik 2 deserves a 7/10! Minus points for stereotype overkill, melodrama and poor character development.

One thought on “In the Movies: Munafik 2”