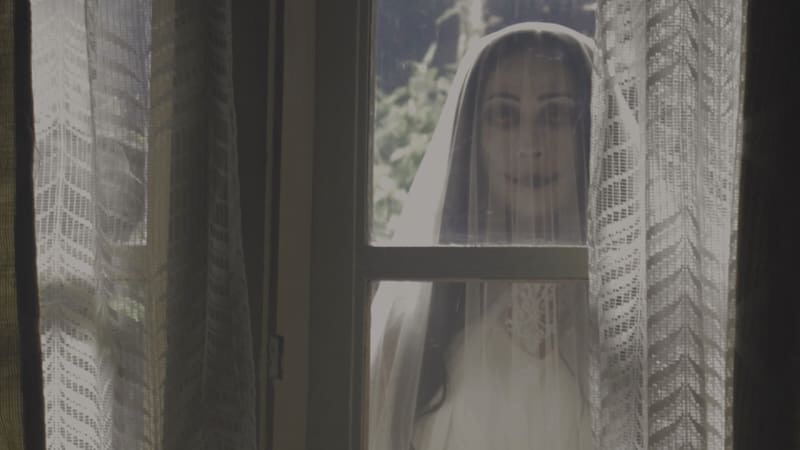 I don’t know what it is: the adrenaline rush, the suspense, the crazy makeup, or what?

Anyway, after IT this was my first foray to the cinema for a horror movie.

If you are planning to watch the latest version of Pengabdi Setan, I recommend you watch the older version first!

The 1980s version is a highly meme-able movie, with memorably corny lines and superficial storyline which is much like most horror movies in the era.

In fact, I find it iconic of the era – the non stop on screen smoking (perhaps a heavy sponsorship from Djarum?), the cars and the house, the party Rita attended (in true 70s style), Darminah’s krebo hair, the blatant disregard of Islamic values and the comically frequent closeups!

If nothing, the movie imprints our mind with the first 10 minutes showing Muslim funeral proceedings in full detail.

It’s a movie worthy of the 80s. More importantly, it sets the background for the current version.

The current version of Pengabdi Setan is not a continuation of it, but rather a reboot. What that means basically u don’t need to watch the old one to understand the new, but there are certain parts of the movie you catch where it is an homage to the old version.

I caught some noteworthy ones:

In both movies, there’s a lot of external shots of the house. Always as an omen to bad things about to happen.

Photo of the set house in 2017 version from The Jakarta Post.

Both houses are white, surrounded by lush vegetation, beautiful trees, and are really scenic.

2. Camera panning from left to right

In the 1980 version, one scene that caught my attention was early on in the movie when Rita heard the doorbell rang while in an altercation with Tommy.

This same technique was applied as well in the new version when, if I’m not mistaken, Bondi heard something at the well room and inspected it. He looked left and right, and the camera followed suit.

In the 2017 version, they introduced us to an asthmatic grandmother who eventually haunts them with sounds of her breathing.

In the 1980 version, that slightly exaggerated and irritating equivalent is Pak Karto.

Both characters who tries to protect the family but both ended up with an unfortunate and untimely death. Pak Karto found hanging in a barn by Tommy, and Nenek found drowned in the well by Bondi.

As Herman/Hendra rushes home to tell Rita/Rini of some potentially life-changing information near the climax of the movie, they swerved, trying to avoid a strategically placed pedestrian crossing the road, only to hit a truck. 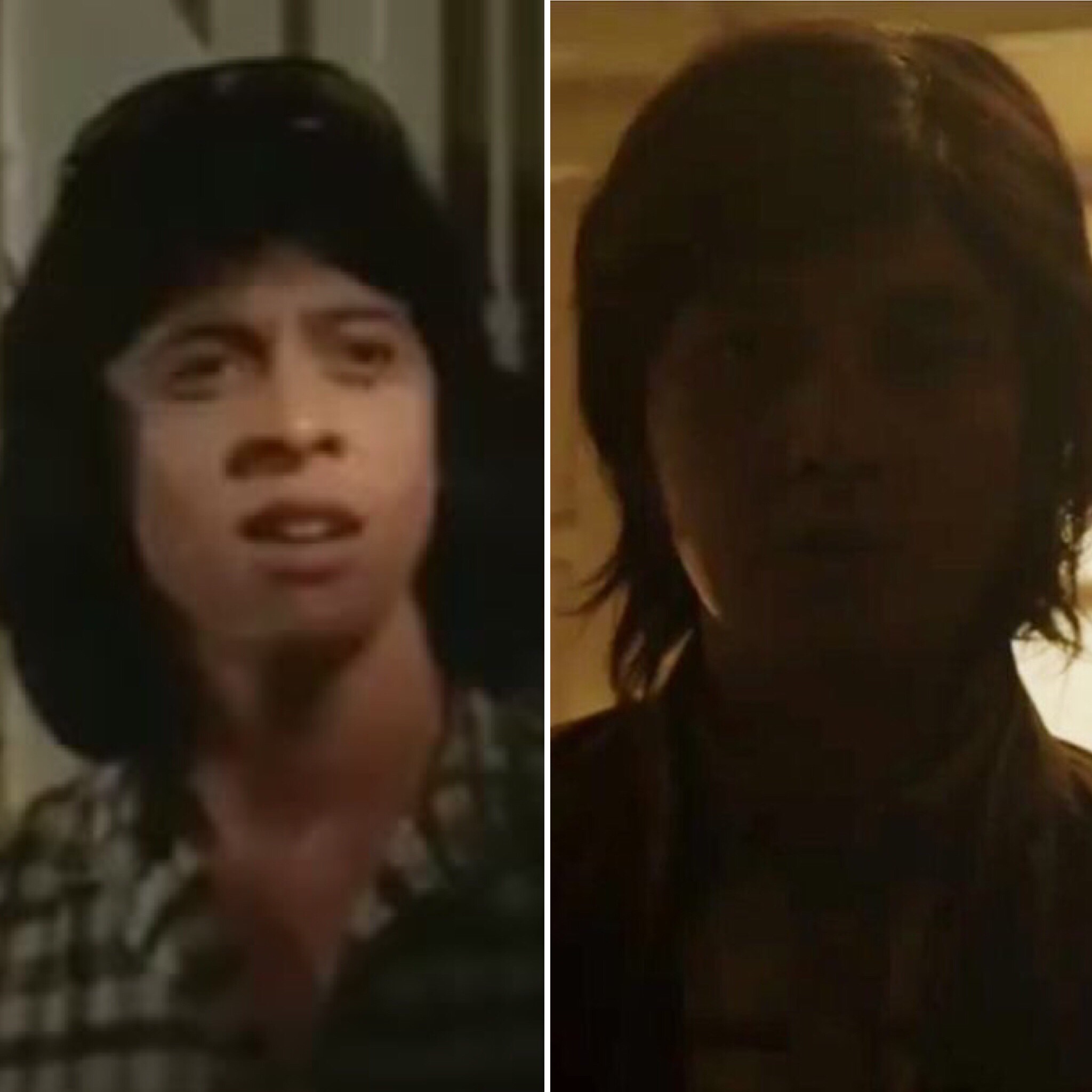 The 2017 one is done in more gory detail but both illicited the same response of SHIT! and a feeling of unfinished business. 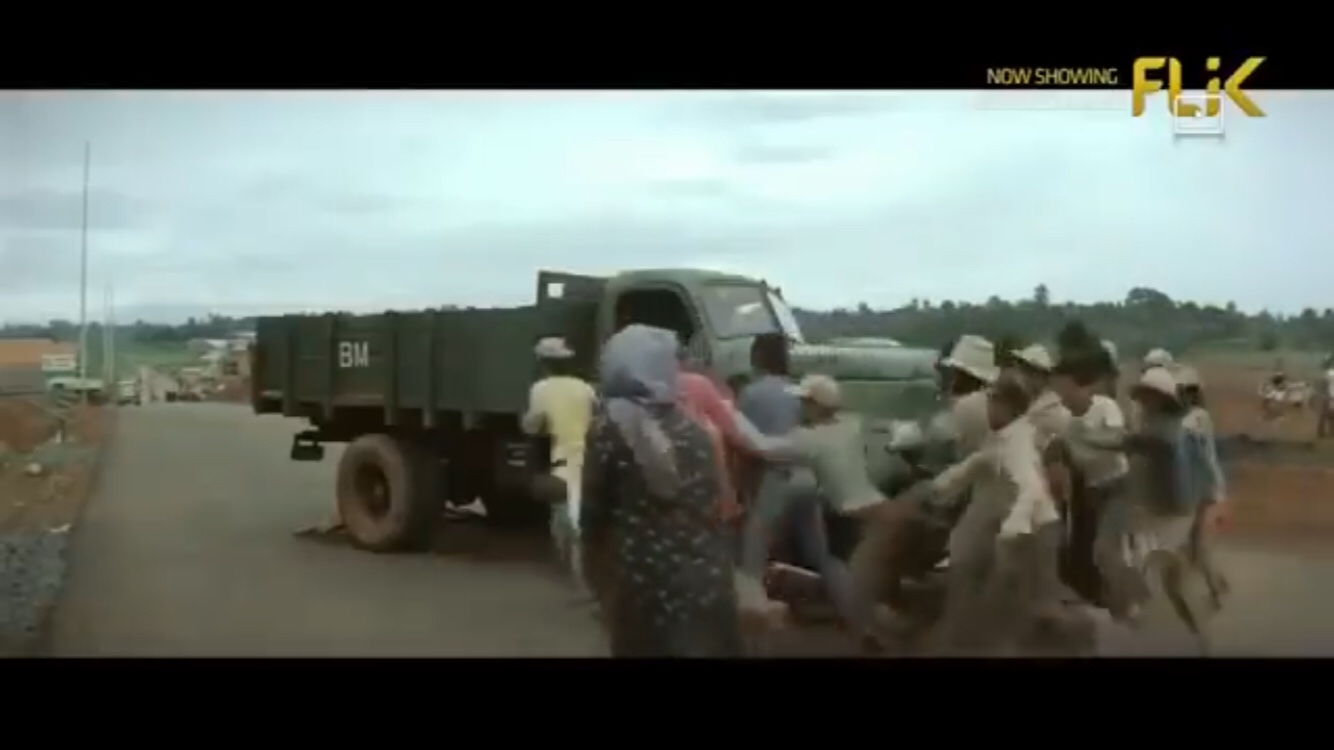 I do have to say I do like the way Hendra is portrayed- son of an ustaz, a realist, educated, definitely someone u trust. U’d wanna pack him up and bring him home to see mama.

7. Muslim funeral proceedings in full detail & the view from below

The most memorable scene in the 1980 version is definitely the first 10 mins where the director spends time to fully detail the proceedings of a muslim funeral.

This was done and recreated perfectly in the 2017 version. 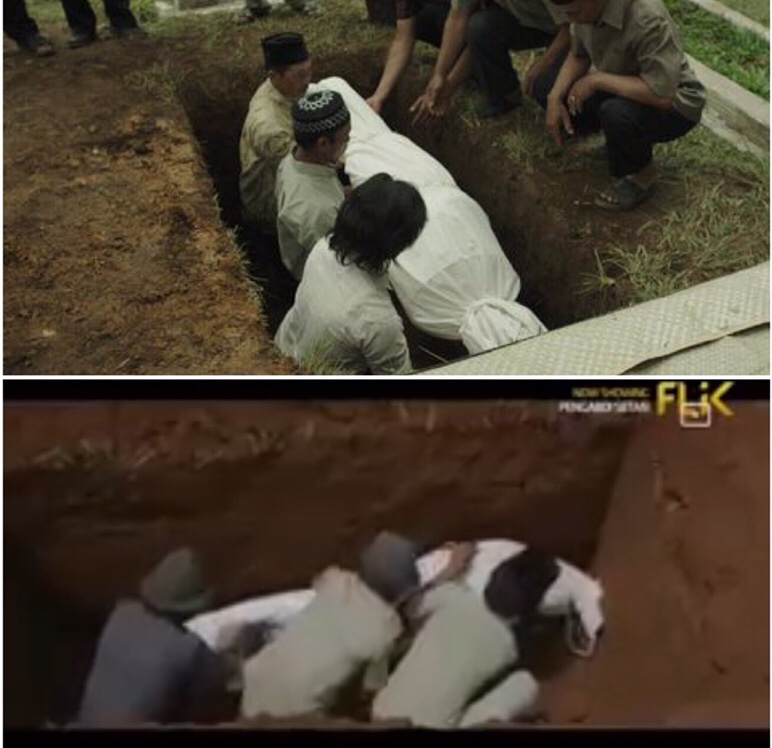 In a way it feels almost obscene to be so detailed and explicit. Someone in their most helpless, at the mercy of others, being recorded. 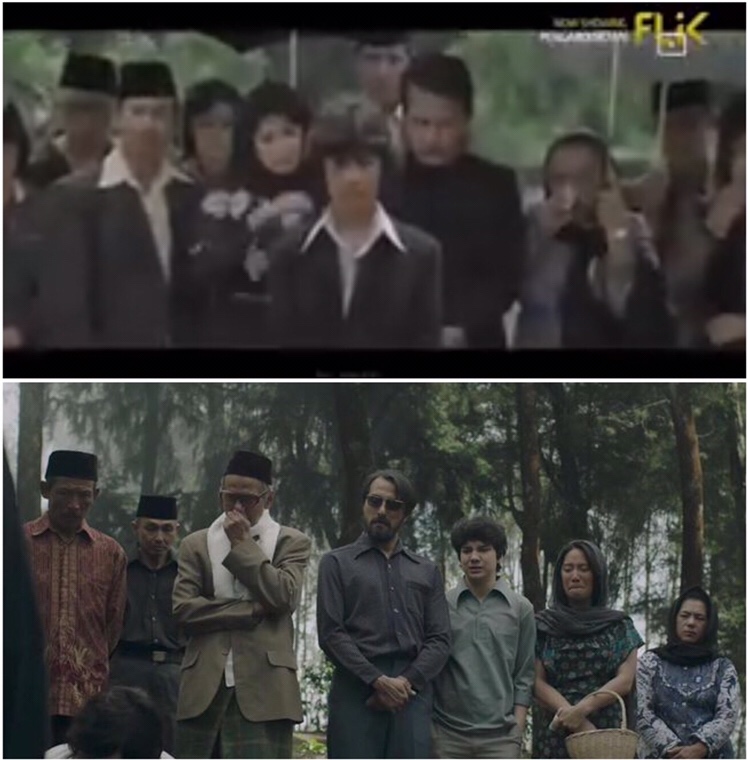 Then, a view of the family left behind from below. 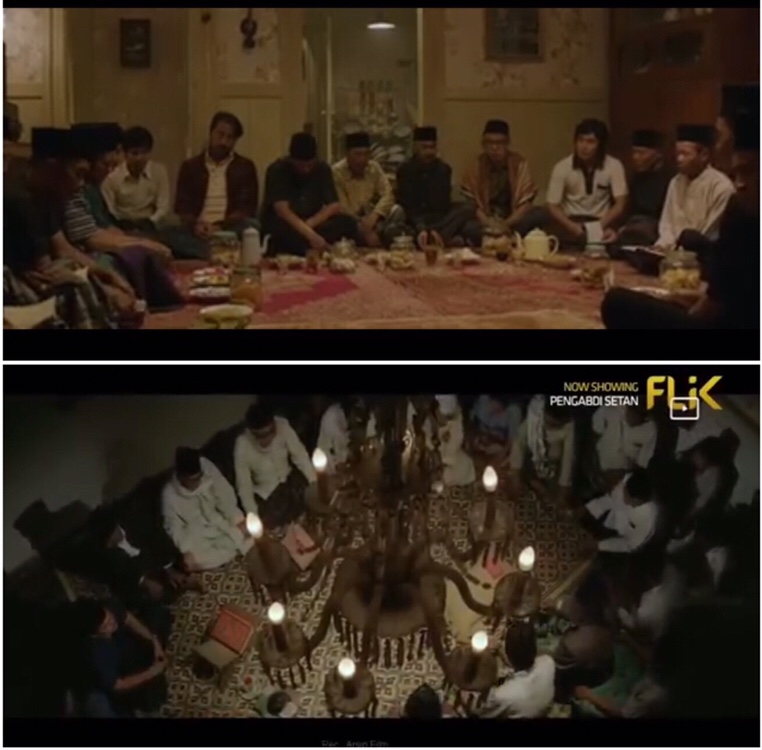 This is followed with a tahlil session at home with the symbollic LA ILA HA ILLALLAH – a foreshadowing of things to come. In both scenarios, the father character looks blankly ahead – sceptical.

8. Scene of Ibu floating near the window when Rini/Tommy prayed for the first time 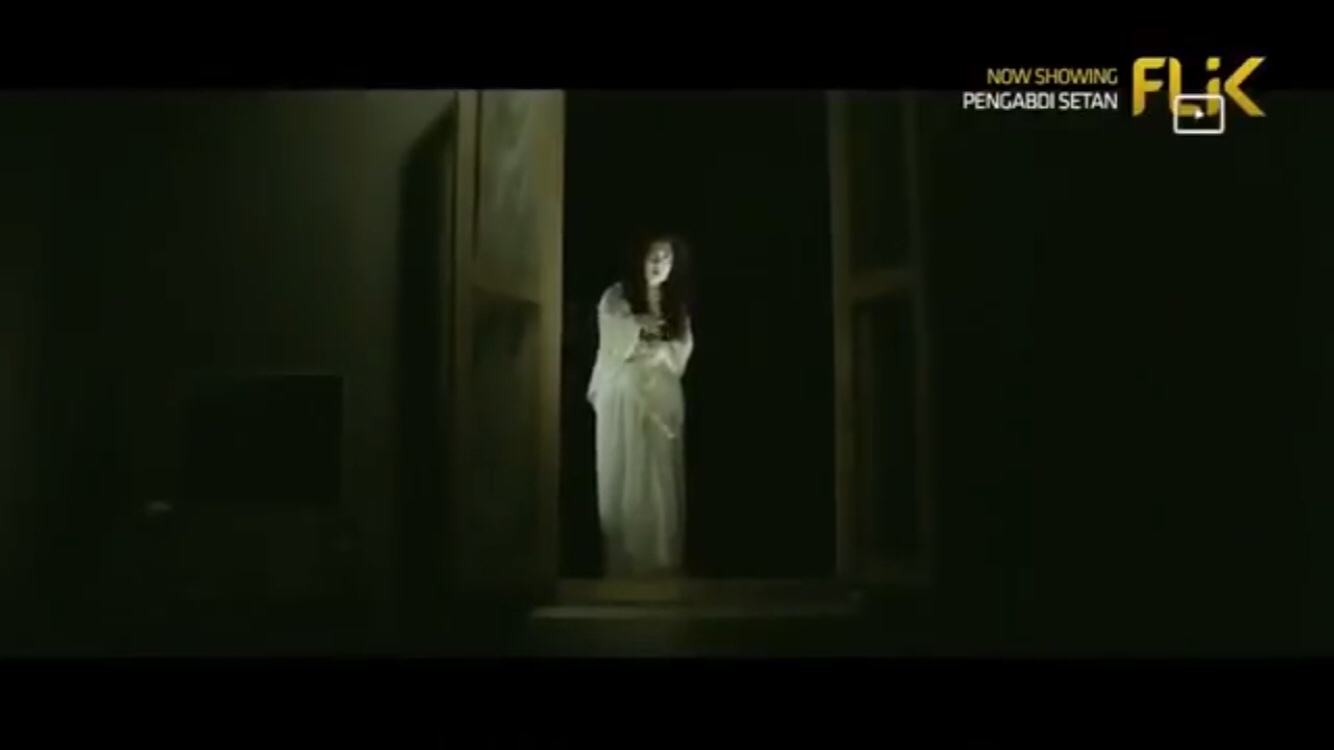 Ibu in the new version which has become a horror meme.

In both cases, fear acts as a deterrent for both Rini and Tommy to perform their prayers.

A strange and new portrayal of religion as usually religion is the fort in which characters can hide behind, and the ustaz is the hero. But in real life that’s not always the case.

The ustaz cannot necessarilly banish evil, but it’s you who must banish it yourself, equip yourself with the right tools and the right strategy.

I’ve saved the best for last.

In the 1980 version, a household manager (the help) is introduced and her name is Darminah. It’s very obvious that she’s the cause and origin of all the evil in the movie.

She appeared evil to everyone except the Father who only believed that at the end when she appeared with the krebo hair. (This I find super offensive haha, why krebo hair = evil???)

Anyway, she is a pivotal character in this movie – and the character is pretty iconic of the movie. I mean, isn’t the worst kind of evil the one that is disguised as good?

I mean, just look at her: 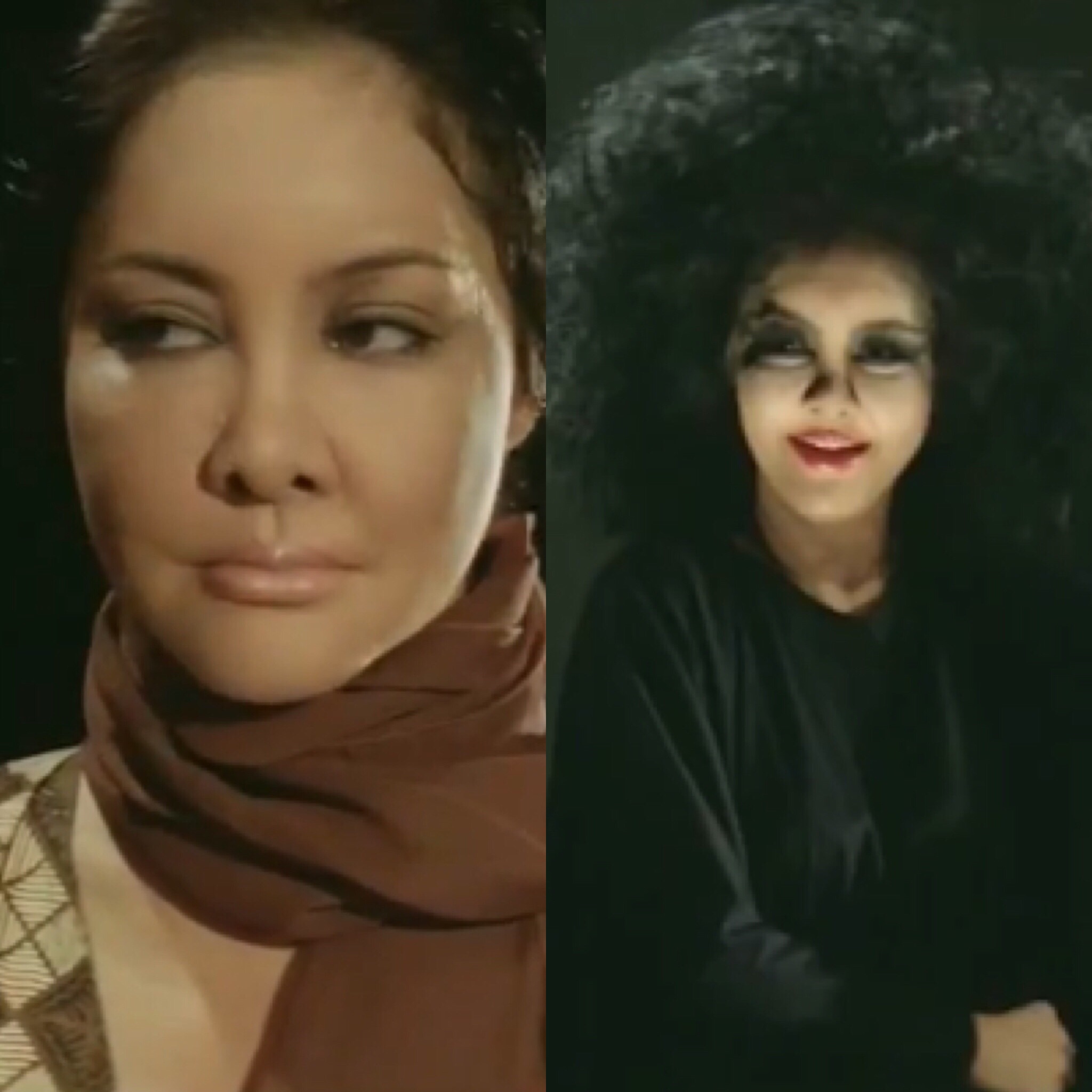 In the new version, the evil is not caused by a single person, meaning the role of Darminah as the bringer of evil is diffused to a few characters – the cult, Ibu, etc.

However, it feels so weird to have a Pengabdi Setan without a Darminah character.

To my surprise, they did introduce the rebooted Darminah.

Making me feel so hopeful that there will be a sequel! The world needs needs a sequel!

It’s so refreshing to not be bludgeoned to death by corny lines, stupid stories that have no bearing on reality, and lame sets.

I love the little nuanced (or in some bits blatant) references to Roman Polanski’s Rosemary’s Baby (did u guys catch this too? Is it just me?)

I am still haunted by the soundtrack- Kelam Malam is an AMAZING addition. The voice keeps on coming back to your mind – beautiful and scary at the same time.

I love the cast lineup- the cast brought to life all the characters perfectly. Bront Palarae was amazing as the jaded father who has seen the world, who has seen sadness, someone who needs to be strong for the kids, someone who is freed by the death of his beloved wife.

Rini’s character is strong and I love that she handles all the traditional roles of a woman – cooking, cleaning, mothering, but she does it with dignity and strength.

Bondi and Ian – brothers that tug on your heartstrings.

And finally, Ibu. She deserves a slow clap with this chilling, horrifying performance.

First trip out in 2023! Road tripping with my bestest bestfriend ever @hazidiee and the best travel buddy ever Zayd.
How many of u don’t know @abokado.japan ada di Mall??? How come I didn’t know??? And it’s huge and baru restocked! I came in to get stuff to organize my fridge but OH MY GOD zayd mahu sejuta mainan jadi tarus laju laju keluar. Help i need to go the mall again!!!
Bah should this go on my vision board? #porschebrunei #porschecayman #718caymangt4rs #gt4rs
Skin feels dry nowadays so my routine focused on hydration! Products used:
A failed jump photo of manusia manusia in my dept yg menjadi penunggu di hujung tahun on the last day of work. Anyone else working today or tomorrow? Leave a comment below so i dont feel alone 😂
Yay the @bruneianmade store is finally here! A one stop store for items created and made by locals - perfect for gift shopping (especially for those last minute gifts!) 😍